From Jacob Riis to StoryCorps: The Documentary Impulse in America Zoom Lecture given by Professor Matthew Basso

Park City Museum will host a Zoom lecture called From Jacob Riis to StoryCorps: The Documentary Impulse in America given by Matthew Basso on Thursday, December 10 from 5-6 p.m.  Please go to https://parkcityhistory.org/event/jacob-riis-zoom-lecture-given-by-matthew-basso/ to signup for the lecture.

This talk traces the “documentary impulse,” strongly associated in the U.S. with Jacob Riis, through the twentieth century to our current moment. As it does so it considers two questions central to Riis and those that came after him: what is the purpose of documenting people’s lives and how does the answer to this question change documentary practice?

Matt Basso is an Associate Professor of History and Gender Studies at the University of Utah.  His research interests include the theory and history of masculinity, labor and working-class history, the history of old age, the history of race and ethnicity, the relationship of the military to society, U.S. Western history, the history of Pacific settler societies, and transnational history.  He offers courses that grapple with all of these subjects.  He is the author or editor of four books including Meet Joe Copper: Masculinity and Race on Montana’s World War II Home Front (University of Chicago Press, May 2013), winner of the Philip Taft Labor History Book Award and the American Historical Association’s Pacific Coast Branch Book Award, and Men at Work: Rediscovering Depression-Era Stories from the Federal Writers’ Project (University of Utah Press, 2012). Basso is a Distinguished Lecturer for the Organization of American Historians and the recipient of the University of Utah Distinguished Teaching Award, Graduate and Postdoctoral Mentor Award, Public Service Professorship, and Honors-Humanities Professorship. He is working on a new history of the World War II home front for the National Park Service and finishing a book on New Zealand history between 1890 and 1940.

Jacob Riis (1849–1914) was a pioneering newspaper reporter and social reformer in New York at the turn of the twentieth century. His then-novel idea of using photographs of the city’s slums to illustrate the plight of impoverished residents established Riis as forerunner of modern photojournalism. Jacob A. Riis: How the Other Half Lives exhibition features photographs by Riis and his contemporaries, as well as his handwritten journals and personal correspondence. Jacob A. Riis: How the Other Half Lives opens November 10, 2020 at The Park City Museum.

The exhibition is made possible by the National Endowment for the Humanities. Jacob A. Riis: How the Other Half Lives is adapted from the exhibition Jacob A. Riis: Revealing New York’s Other Half, organized by the Museum of the City of New York. The exhibition was curated by Bonnie Yochelson and co-presented by the Library of Congress. It was made possible with major grants from the National Endowment for the Humanities and the Terra Foundation for American Arts, as well as support from D. Euan and Merete Baird, The Malkin Fund, Ronay and Richard L. Menschel, Queen Margrethe and Prince Henrick’s Foundation, C. Flemming and Judy Heilmann, Kan and Lotte Leschly, The Robert Mapplethorpe Foundation, and the John L. Loeb Jr. Foundation. It was adapted and toured for NEH on the Road by Mid-America Arts Alliance. 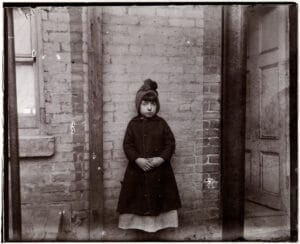 Register for this lecture